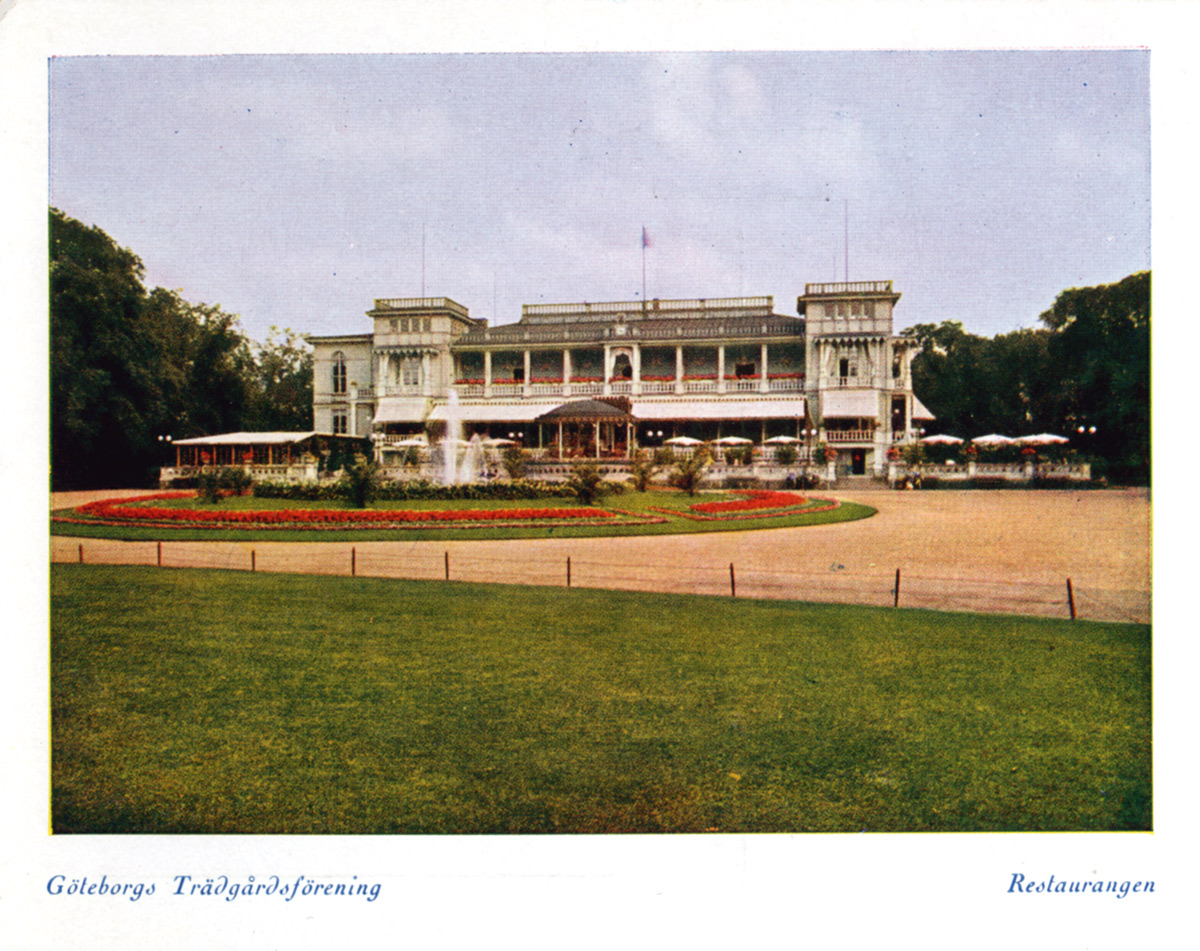 Trädgår’n has been in the center of the history of Gothenburg for more than 100 years.

The very first café/coffee bar opened on this spot during spring time year 1858 and was drawn by the architect Adolf W. Edelsvärd. The staff were of men only and the only liquor served was punch. The name during this time for the café was Schweizeri or ”Café pavilion with three Verandas”. It was later rebuilt and additions were made throughout the years. Back in the 1870s it was described to be built in a style such as “…a light, but amazing moors style, where the refreshments have been occupying the public in the most flourish way at hand. When, during the summer nights, and you are listening to what the different music corps have to offer and to add a beautiful pavilion to it all there is no wonder it is so well-attended.”

The need of a modern restaurant in Gothenburg was growing at a rapid pace and in 1885 it was decided that the community was to build one, which costed SEK 75 000. The 14th of April in 1887 the restaurant was having its premiere, together with a concert hall. It was drawn by the architect Adrian C. Peterson. In the year 1892 there was an addition built to one of the wings and in 1899 electricity was contributed to the venue for the very first time. By a rebuilding in 1922 for SEK 374,000, the restaurant was significantly expanded and in 1938 it invested SEK 80,000 in improvements in the property.

Already in Valborg four years later, the new restaurant with both dance floor and cabaret stage was completed and thus Gothenburg’s counterpart to the Hamburger Börs in Stockholm was born. The garden was a natural pleasure place for both Gothenburg and tourists and became an important institution for entertainment in Gothenburg. Here have Magnus & Brasse, Lasse Berghagen, Lill-Babs, After Shave and Galenskaparna, After Dark, just to name a few, praised dinner shows for generations. At the concert scene, some of Sweden’s most successful artists have performed several times, and many international greats have also visited Trädgår’n over the years. To name a few; Pink, David Guetta, 10CC, Kim Larsen, Alice Cooper, Robyn, Axwell, Calvin Harris, Roesanne Casch, Chris Isaac, Chaka Khan and others. ABBA made their very first live performance ever at Trädgår’n, they were going by the name “Festfolket(Party People)” during these days.

Two of the country’s most mentioned and popular nightclubs were Yaki-Da and SommarYaki, whom were born at Trädgår’n in the 80’s.

In July 1994, Trädgår’n again burned down to the ground

Since 1998, more than 1400 concerts and dinner shows have been performed at Trädgår’n and more than 3 million guests have visited us, which is pretty impressive if we dare say so.

So you can easily say that Trädgår’n is proud of its history of restoration and pleasure in Gothenburg and has been strongly contributing to the fact that the city today is as strong a city of events as it is today.